Things to Consider When Planning a Gender Neutral Toilet

Things to Consider When Planning a Gender Neutral Toilet

In recent years, there has been a notable shift in attitudes towards inclusivity, expression and gender identity. This has also happened in conjunction with a push for greater equity among the sexes, with both of these factors having an impact on the rising popularity of gender-neutral toilets in public spaces.

However, despite these changes in viewpoint and the increased installation and use of unisex toilets, their presence in society remains controversial. Many moral arguments exist both in favour of and against their use, particularly when discussing issues such as the possibility of unisex toilets in primary schools, secondary schools and other public places which children might enter.

At Concept Cubicle Systems, we have had years of experience in designing and installation of a wide variety of bathroom cubicles. As such, we are fully qualified and more than happy to discuss the design of unisex toilets in the workplace, schools and other public spaces. We can also provide some practical suggestions which might help your bathroom’s users to feel more comfortable while in the facilities.

Many people are unlikely to be aware of some, or even most, of the benefits of having a gender-neutral bathroom installed in their office, leisure centre, an institution of education or healthcare building. As experts in the creation and installation of bathrooms and washroom facilities, we can help to explain these advantages in more detail.

Advantages of installing gender-neutral toilets in your place of work include: 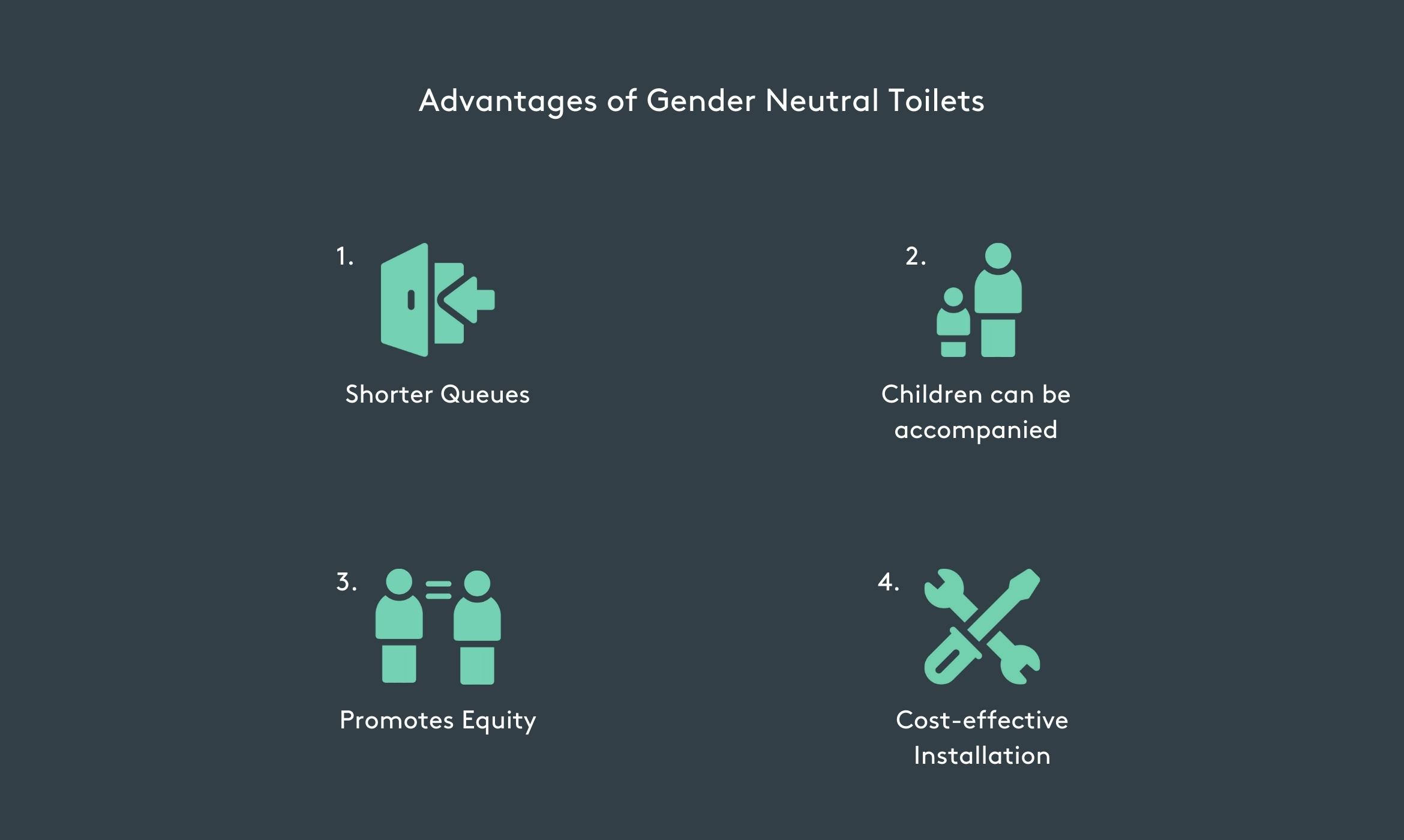 It has been shown that traditional designs of washrooms installed in public places over time have generally favoured men over women. Public toilets for both men and women are usually built the same size when paired together, but this does not always take into account the fact that women generally have smaller bladders than men and have to use cubicles to take care of feminine hygiene issues as well.

The design also does not take into account the fact that women have to sit to use the bathroom, and that clothing such as tights can be more restrictive when preparing to use a toilet and when a person has finished.

Such problems have resulted in much longer queues for women’s toilets than for men’s, but this can be reduced or even prevented with the installation of gender neutral toilets. This is because unisex toilet sizes are the same, and the same amount of space which features both urinals and cubicles will shorten the amount of time a person needs to wait to use the bathroom.

Children Can Be Accompanied

Both adult men and adult women may feel uncomfortable entering a public bathroom marked for the opposite sex, even if they are doing it to look after their children while they use the facilities. The only alternative, in this case, would be to allow a child to use public toilets by themselves, which can be dangerous. By installing a unisex public toilet, this problem can be removed entirely and parents can be allowed to comfortably supervise their children.

Gender-neutral toilets are extremely beneficial to transgender people, as being presented with the option of choosing one of two single sex toilets can often lead to troubling dilemmas. Many trans people may be denied access to a toilet if another person refuses to let them use the bathroom of the gender they identify as, and can face anything from insults to violence for even attempting it. Having unisex toilets in a facility would resolve this issue.

Unisex toilet regulations also already cover disabled facilities, in that they are usually separate rooms with doors that lock from the inside. By choosing to install gender neutral bathrooms, there is then also the possibility to include more large cubicles for disabled people in the space not being used, meaning that there will be more than one facility open to those who require them.

At Concept Cubicle Systems, our cubicles can be made to measure, so that anybody who wishes to use your newly purchased bathroom facilities will have the space to do so. Call us today and we can discuss what you require, both in terms of anticipated needs and the property type you have.

Having unisex toilets at work can also save your firm money, by cutting down on space that would normally be taken up with two separate sets of bathrooms. The extra room can then be used for other purposes, while fewer fixtures and fittings reduce the amount of time and money spent on cleaning and maintaining them.

As well as having benefits, there are also some detrimental aspects of installing gender-neutral toilets. Some members of the public may be more aware of these than the advantages, but we can also help by discussing them here.

Disadvantages of installing gender-neutral toilets include:

The main concern of people who object to the idea of unisex toilets is that it will lead to an increase in violence, particularly against women.

There is a possibility that some people when confronted with the prospect of sharing a bathroom with the opposite sex, will be too embarrassed to use the facilities. Many of these may already suffer from paruresis, or “shy bladder syndrome”, and therefore find it difficult to go to the toilet when surrounded by others of their own sex already. Though there is no data which shows how gender-neutral toilets would have an effect on this problem, there is a chance it could impact on the figures currently recorded.

In many cultures and religions, women are forbidden from sharing close spaces such as bathrooms with men they are not married to, or related to. This particularly becomes an issue during their menstrual cycle.

When you bear these advantages and disadvantages in mind, it becomes more possible to consider what needs to go into the planning of a gender neutral toilet. These include things such as:

We have also already made a blog post about the legal requirements that need to be followed for toilets in the workplace, and this covers the number of toilets and washbasins that need to be present in a bathroom that will be used by both men and women.

To help you work out the correct unisex toilet dimensions for your building, the number of washbasins and toilets that should be provided are as follows:

Recommended toilet cubicle dimensions are available for viewing in Part M of the Building Regulations, though if you feel you may need more help in getting cubicles to the measurements you need, get in touch with us today. We can help you with the size, design, colour and pattern of your chosen toilet cubicles, and we will be happy to install them across a range of sectors.

If you have been looking for a new design of toilet cubicles for your business or facility, or if you are installing a completely new bathroom (gender-neutral or not), contact us using the form provided on this website.

We are passionate about providing high quality, easy to clean and easy to maintain toilet and shower cubicles for offices, leisure centres, educational and healthcare facilities of all types, and we want our customers to be happy with the product they receive. As such, we will do everything we can to get you the cubicles you want, in exactly the way you need them.