In the absence of clear legislation governing the provision and design of gender neutral washrooms, this session for architects, specifiers, contractors and education and business leaders will help demystify some of the issues around gender-neutral facilities and help you avoid unnecessary controversy.

The session is perfect if you are looking to understand;

There are a number of reasons for this. In schools, for example, it’s thought that gender neutral facilities can reduce bullying and incidents of anti-social behaviour. But the primary driving force behind the increase in unisex facilities is an accelerating shift in the visibility of transgender and gender non-binary people in society.

Although there’s no hard data, the government estimates that there are between 200,000 and 500,000 people that identify as trans in the UK. And there’s likely to be many more that don’t identify as a man or a woman.

This is important, because a Stonewall report on discrimination against transgender and non-binary people in England, Scotland and Wales found that two in five trans people (41%) and three in ten non-binary people (31%) have experienced a hate crime or incident because of their gender identity in the last 12 months. 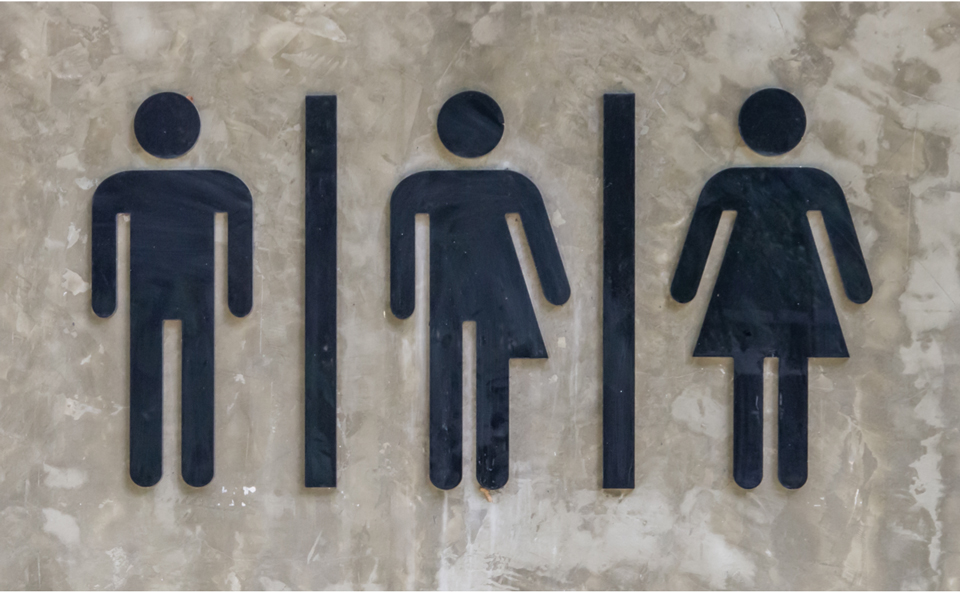 What the law says

There is no specific legislation governing the provision and design of gender-neutral bathrooms. However, many LGBT, education and public sector groups argue that equalities legislation can be applied to washroom spaces.

Gender reassignment is a protected characteristic under the Equality Act 2010. This prohibits unlawful discrimination, harassment and victimisation – protecting transgender people from being discriminated against in fields including education, employment and in the provision of public services.

Schools and universities have proved particularly receptive to the installation of gender-neutral toilets. At least partially this seems to be because they are popular with young people.

In London, an average of 50 children per week are referred to a health service that helps them to develop their gender identity. Similarly, when a plan was put forward for gender sharing washrooms at an Oxford college, 80% of students voted in favour of the motion. 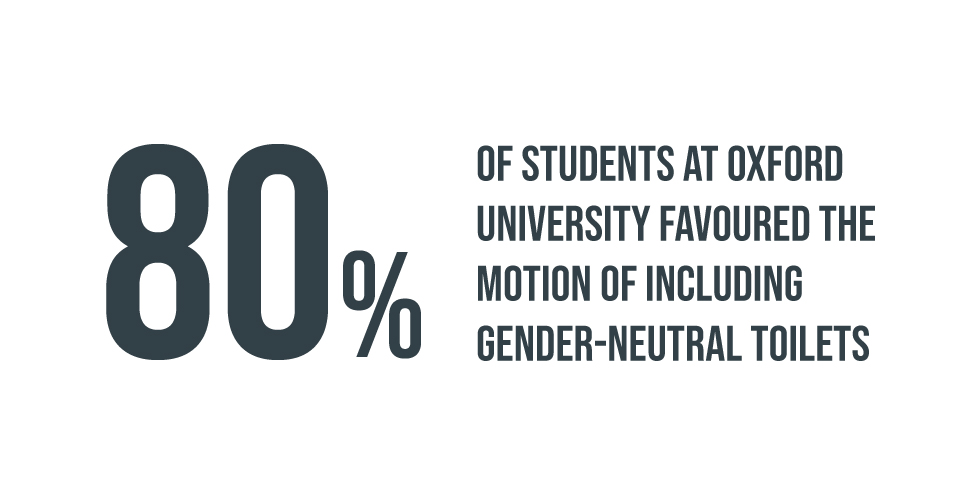 It’s not just in education settings, however. Huge employers like Google, Facebook, WeWork, Lloyds, Barclays, HSBC, Wagamama and even the British Army have installed unisex bathrooms in an attempt to attract the best and the brightest talent from a range of different backgrounds. 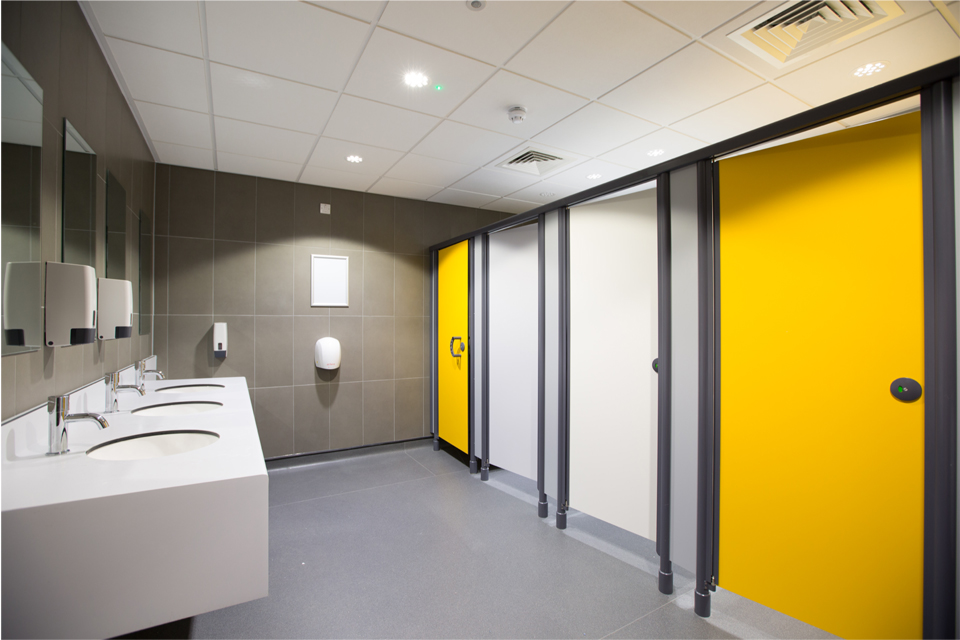 Many people have also raised concerns along the issues of safety and fairness.

In fact, the government recently launched a consultation in which it says: “The government’s position is also of the view that there needs to be proper provision of gender-specific toilets for both men and women, with a clear steer in building standards guidance.”

The consultation document goes on to say that gender neutral facilities can place women at a ‘disadvantage’, arguing: “While men can use both cubicles and urinals, women can only use the former, and women also need safe spaces given their particular health and sanitary needs (for example, women who are menstruating, pregnant or at menopause, may need to use the toilet more often).

One of the best ways to tackle these murmuring doubts while also promoting inclusivity is with well-considered planning and design.

A lack of clear guidance and design principles has left many specifiers, architects and contractors in the dark about key issues and, in some cases, caused negative outcomes for users and clients.

In 2018, for example, female employees at the Home Office refused to use a £36,000 gender neutral toilet block because male colleagues would use the cubicles with the doors open. Similarly, the Old Vic theatre in London came under fire when it converted all male and female bathrooms into gender neutral spaces, but women weren’t able to use some of the blocks because they contained urinals. 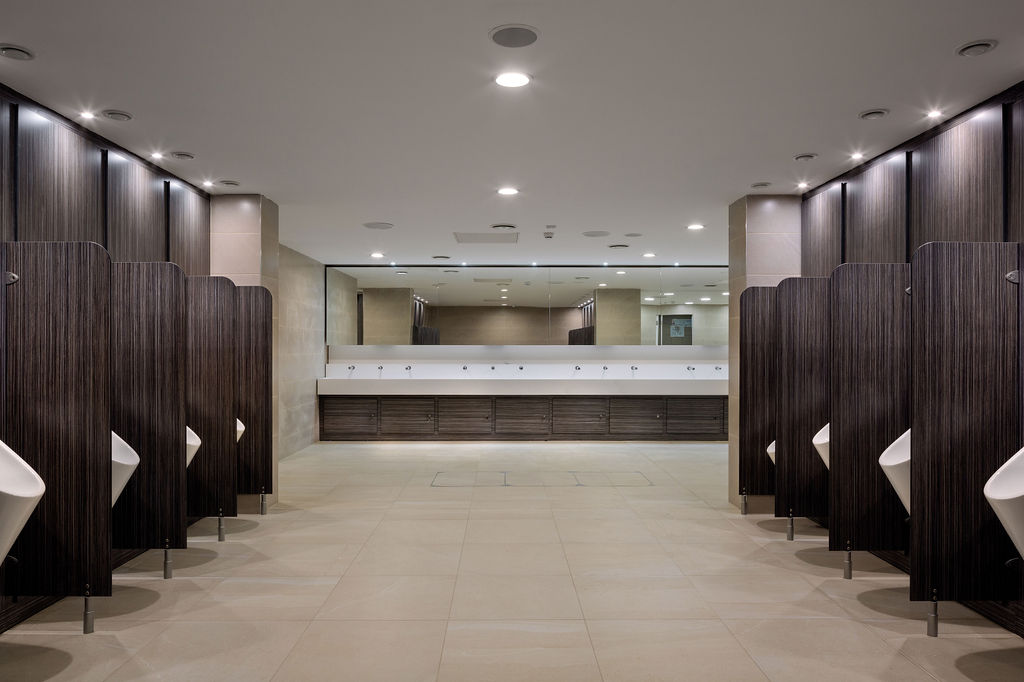